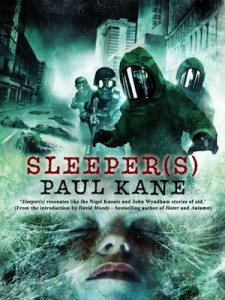 I’m sure many of you know of Paul Kane. Paul and I go back a fair few years now – I think we first spoke around the release of HATER in early 2009. Our paths crossed more recently when Paul and his other half Marie edited THE MAMMOTH BOOK OF BODY HORROR which contained my story, ALMOST FOREVER (and that’s an anthology well worth checking out – click here to remind yourself).

Paul’s back with a new novella – SLEEPER(S). It’s a great book with a real Quatermass-like vibe to it, and I was honoured to be asked to write the introduction. Here’s the blurb:

“The sleepy English locality of Middletown is about to get even sleepier, as a strange malady starts to affect the population. It spreads quickly, causing the authorities to quarantine this small city, and seek out the only person who might be able to help: Doctor Andrew Strauss. However, Strauss has a secret, one that has linked him to this place all his life, one that has linked him to a particular person there, though he doesn’t yet know who. But he’s not the only one hiding things – and as he ventures into Middletown to collect samples with an army escort, a mixture of UK and US troops, cracks soon begin to appear in the operation. Especially when his team come up against the most terrifying threat humankind has ever known…”

SLEEPER(S), from Crystal Lake Publishing, is available from Amazon.com and Amazon.co.uk.