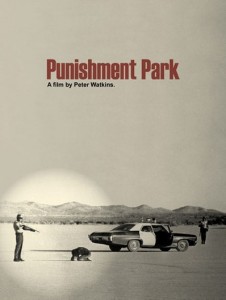 At this point in time, when news about my books is thin on the ground (I am busy writing, honest!), I’d like to try and keep your interest by making regular book and film recommendations. So here’s another submission to my ‘Post-Apocalyptic Movie Club’ (click the link for previous films), and it’s one that’s a little more obscure than some of the others I’ve posted about.

Peter Watkins is a fascinating, controversial and, in my opinion, unfairly overlooked film-maker. Click here to be reminded of my thoughts on one of his earliest films – THE WAR GAME – a 1965, Oscar-winning BBC film which portrayed the effects of a nuclear attack on Kent and which, due to it’s unflinching treatment of the subject matter, remained largely unseen for over twenty years. Today I’d like to introduce you to another of his films, PUNISHMENT PARK. A movie made in 1971 which, at the time, was effectively buried and given only the most cursory of releases.

Here’s the trailer. Click the link below to find out more. william hill fogadóiroda

Set in 1970 against the background of the Vietnam War, the film portrays the United States as facing some uncomfortably familiar problems. Anti-government sentiment is high and jails are full to overflowing. Convicts are given a stark choice: spend their full sentence in prison, or spend three days at Punishment Park. Far from an easy option, Punishment Park involves having to traverse fifty-three miles across the desert within the allocated timescale and without food or water, whilst being chased by National Guardsmen. Reach the flag at the end of the course without being captured and the convicts will be released. nyerögépes játékok ingyen kockás Get caught, and they’ll end up in prison (or worse).

The film follows two groups of detainees – one already trying to get across Punishment Park, the members of the other still being tried in a desert-based hearing. Largely improvised, I found it to be an extraordinary movie – clearly rooted in the social issues and desperation of the day, but with frightening parallels with world events and political attitudes today. tippmix eredmények él?ben Try watching this and not thinking about Guantanamo Bay, the numerous desert wars, and the social inequalities protested about by Occupy and countless others.

In my piece about THE WAR GAME, I mentioned Watkins’ unique style. PUNISHMENT PARK is similar in that it’s a faux-documentary, filmed by a crew which is not quite there, if that makes any sense. They watch events unfold and document them, but remain somewhat detached. That’s a particularly effective approach as far as this film is concerned, as it allows Watkins to show the good, the bad and the (very) ugly of all the characters and organisations involved. The film crew is there to show the impartial intentions of the military, but as the prisoners approach the end of their ordeal, things change drastically. Watch for some intense scenes as the line between improvisational acting and genuine anger becomes blurred…

I’ll not say anymore about the film, I’d just like to recommend you check it out. It’s available on DVD (with a very interesting introduction from Watkins) here, and you can always check LOVEFiLM or Netflix. Uncomfortably relevant and well worth your time.