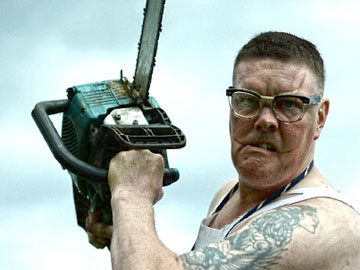 It feels like a very personal movie, not least because the couple behind the camera were the same people on screen. Dom had previously said that the production of BEFORE DAWN was quite intense, being filmed over a short period of time with limited resources. I wondered if that behind-the-scenes intensity added to the film? “We planned BEFORE DAWN very carefully and made sure we had a water tight schedule. However, nothing can prepare you for the realities of a film set with it’s own set of disciplines. We knew that as long as we stuck to the schedule then we would be on solid ground as far as getting everything covered. It was an intense and, at times, fraught shoot but we were all fulfilling what we had set out to achieve. It was quite exhilarating but at the same time very hard work. We all slept where we worked and the days were long.

“I think the fact we were up and running kept us all up and concentrated. Getting to all the special effects shots was great fun. The more gory the effect and the more blood involved, the more we were all falling about the place. We like to believe we’ve captured some truly appalling shots of gore and violence in BEFORE DAWN but it was so much fun setting them up. The out-takes on the DVD show that the atmosphere on set was the total opposite to that of the atmosphere of fear and confusion within the film!” 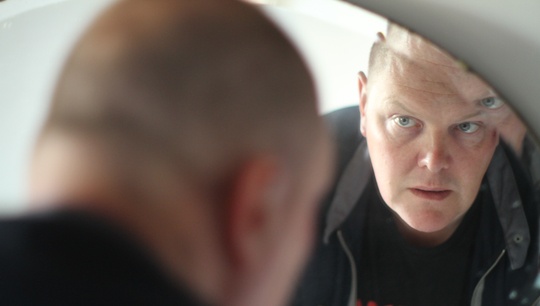 So what is it about zombies that fascinates Dom? He’s co-founder of the LEEDS ZOMBIE FILM FESTIVAL and cites his favourites as including “Dawn of the Dead, Colin, Night of the Living Dead, Re-Animator, Return of the Living Dead, Flesh Eaters, Nights of Terror, The Blind Dead series, Fido, Le Horde, Nightmare City, 28 Days Later and many more.” I asked him why the living dead are his monsters of choice? “I think zombies are guilt free horror and usually the goriest films within the horror genre. Even if someone is badly mauled by a zombie it’s okay because they will get back up again, albeit as a zombie, then when they are killed again it’s still okay because you’re killing a monster and now they deserve it! It makes sense to me anyway! Also there’s no reasoning with the undead. They want to eat you and that is their only reason for being. You can’t offer them an alternative and they’re not listening anyway. They will only stop if you destroy their brain. Running or shambling, I don’t care. I love a good zombie story whether told in book, comic or film form.”

Something else I touched upon last week was the polarity of the reviews I’ve come across for BEFORE DAWN. I asked Dom how he responded to this. “I have huge respect for horror fans as they are (for the most part) open-minded to anything different. I’m a big geeky nerd of a horror film fan. I’m proudly one of them myself, and this film is for them. The negativity we have come across has been more on the shallow side. The film is an allegory, It is about how far you would go for love. There are themes of redemption and regret. It is about the disintegration of a relationship set against the disintegration of society and the world. Then you read a review saying “I don’t like Emmerdale, zombies shouldn’t run and they talked a lot in the first fifteen minutes”. Fair enough. The support we have been shown though has blown us away and we could never have expected things to have gone as far as they have. We have been dubbed into Japanese and German with distribution in these countries as well as Australia, New Zealand, Canada, America and showing at Cannes and Berlin film festivals. Metrodome have been brilliant to us in the UK, even giving the film a limited theatrical release. We are very proud of BEFORE DAWN and hope people like and understand it.”

Finally, I asked what’s next? “We’ve done two shorts in the last year (Grace’s Story and After Three) which will be showing at festivals this year and we will start shooting a female revenge thriller in November which has got us really excited.”

Thanks to Dom for his time and enthusiasm. Once again, I highly recommend BEFORE DAWN. If you’re in the UK you can get hold of the DVD here.

Speaking to Dom and seeing his film has rekindled my desire to make a zombie movie myself. And with that in mind, I hope I’ll have some news to share with you in the very near future…