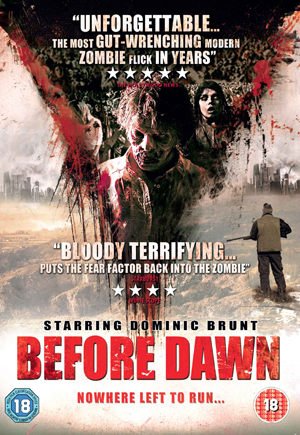 I had the pleasure of meeting Dominic after a screening of the movie last November, and I was amazed to discover he was a fan of AUTUMN. Before Dawn is a quiet, lo-fi zombie apocalypse like the first Autumn book, and maybe that’s one of the reasons the movie appeals to me so much.

The plot’s relatively straightforward. Alex and Meg, an estranged couple, head away to a cottage in the countryside to try and salvage their troubled relationship. While they’re there, isolated from civilization, the dead rise and the rest of the world begins to fall apart. Whilst out running, Meg is attacked and bitten. She makes it back to the cottage and the couple fight to survive as the situation rapidly deteriorates.

So far, so what? Sounds like something you’ve seen/read a hundred times before, right? Wrong.

I found Before Dawn to be a truly remarkable film. Intelligent, gripping and not at all what I was expecting. There are subtle layers to this story which catch you unawares, and it’s told in a well-paced, intimate way. It’s bleak and very well crafted with limited resources (the movie was filmed over a very short period of time using locations including the couple’s own house!).

Before Dawn was released on DVD in the UK last month (click here), and it’s been interesting to watch the reviews roll in. They’re unexpectedly familiar to me – reminiscent of how people often react to the Autumn books. Some folks immediately get that the focus is the living, and that they’re not going to get a story full of blood and guts and gunfire, others take real objection to the fact they’re being denied their standard zombie fare. In fact, I even joked with Dom that I wish he’d got hold of Autumn to film, because Before Dawn is far closer in tone and feel to the novel than the 2009 Renegade movie adaptation.

By the way, that’s not to say you’ll be starved of blood if you watch Before Dawn. Far from it, in fact. There’s plenty to keep you happy, and I found the zombies themselves in this film to be particularly effective. They move unpredictably – spitting, spasms and twitches, whines and screams… and there’s an unexpected development towards the end of the movie which adds a new twist to the debate about the mental state of the living dead… truly fascinating.

I’ll not say too much more – I want you to go into the film with an open mind and hopefully enjoy it as much as I did. I’d definitely recommend Before Dawn to any discerning admirers of zombie film. Come back here next week when I’ll have an interview with Dom about the movie. In the meantime, click here for the movie’s website, or here to get hold of the DVD.