Right, nearly there with my recaps of the AUTUMN series in readiness for the UK release of AFTERMATH next week. Today I’m going to look at the various short stories I’ve written to expand and compliment the overall story over the years.

As I’ve already explained, AUTUMN started small but grew rapidly in size, its cast of characters growing with each new novel. Apart from jumping back in time to the beginning of the outbreak at the beginning of THE CITY, and the parallel events of PURIFICATION and DISINTEGRATION, it’s told in a largely linear way. That’s all well and good, but as I introduced each new character, I found myself wanting to go back and tell their individual backstories. To have done that within the books would have made them unnecessarily complicated, and so I came up with AUTUMN: ECHOES.

Originally appearing online only, these (very) short stories explained what had happened to minor background characters from THE CITY to get them from the end of the world to the city centre university where the survivors had grouped at the beginning of the book. It seemed to work so well I continued and did the same with some of the new characters from PURIFICATION too, and it was while I was putting together the third book that these ECHOES seemed to take on a life of their own. Here’s a brief extract from a scene near to the end of the book: 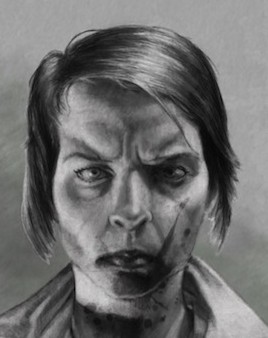 “Eight weeks ago this had been an intelligent young clothing store department manager with a bright future ahead of her. Now it was a mud-splattered, half-naked, emaciated collection of brittle bone and rotting flesh. Unlike the majority of the seething crowd, however, this one was beginning to exhibit signs of real control and determination. Unlike those which simply stood there vacantly or those which ripped and tore at the other corpses immediately around them, this body was beginning to think.”

As well as talking about the living, I thought it would be interesting to look at the dead too. I gave this particular corpse a name and an identity, and explained how she/it had managed to get from the moment of her death on the shop floor, all the way to the front of the vast crowd surrounding Monkton Airfield. I hadn’t read much zombie fiction told from the POV of the dead at that stage, and so Amy Steadman was born. You can read Amy’s story here (and here, here, here, here and here).

And the more of these things I wrote, the more I realised I could go anywhere. I began to investigate what was happening to the rest of the world outside the main novels. I went back to the first book to tell the story of Philip Evans (the character played by David Carradine in the AUTUMN movie), then followed Kate James to explain what happened to the rest of the survivors in the community centre once Michael, Emma and Carl had left.

Once PURIFICATION had been released, I knew I still had more stories to tell. During the planning of the novels I’d come up with numerous situations I wanted to explore which didn’t necessarily fit the books: a survivor who coped with the apocalypse by denying everyone else was dead, a useless politician terrified he was going to have to take sole responsibility for what was left of the world, a seven year-old boy left alone, a teenager on a final booze, drugs and hormone-triggered bender, a person who refused to leave the home they were so proud of behind, a group of people who despise each other trapped by the dead and forced to work together to stay alive… Over a period of months I wrote all of these stories and more, and decided to publish them alongside the original ECHOES as AUTUMN: THE HUMAN CONDITION. The book was far more successful than I’d expected. I thought only a handful of people would have bought it out of curiosity, but boy, was I wrong!

I explained last week that I hadn’t originally intended to write more than three AUTUMN novels. As the series grew in size, so I kept writing more ECHOES and more shorts even after THE HUMAN CONDITION had been published. When the series was acquired by Thomas Dunne Books and Gollancz in 2008, both publishers told me they didn’t think a collection would be commercially viable, so THE HUMAN CONDITION disappeared in favour of AUTUMN: AFTERMATH. Once the re-releases began in 2010, though, I knew I wanted to make the additional fiction (about 120,000 words by that stage) freely available again. The idea for an illustrated website was born, and www.lastoftheliving.net was launched soon after. A number of great artists contributed to the site, and you can still view all their work there. I’ve also run features on several of them here. 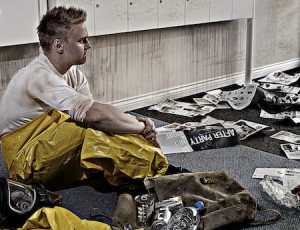 So now here we are – it’s late 2012, and the UK release of AFTERMATH is just a week away. I’ve said throughout this AUTUMN retrospective that these articles have been my way of signing off from the series once and for all. I now feel like I’ve got one thing left to do, and that’s going to happen in 2013 when I re-release a definitive, expanded edition of AUTUMN: THE HUMAN CONDITION through Infected Books, complete with every AUTUMN short I’ve written and a few more besides which haven’t yet been finished.

In the meantime, please do visit www.lastoftheliving.net and read up on some of the free fiction you might have missed over the years. Want to know what happened to Michael and Emma between the end of AUTUMN and their reappearance in THE CITY? Click here! Want to know what happened to the soldiers left behind after the battle at the beginning of PURIFICATION? Click here!

And even if you’ve already read every word of free fiction over there, please come back next week for the launch of the final book when I’ll be debuting a brand new and very, very special AUTUMN short story which ties nicely into AFTERMATH.