An interesting theme (which, coincidentally, is one of the underlying themes of TRUST) is how hard it is for an individual to hold on to their own beliefs in the face of massive opposition from everyone else. Today’s Post-Apocalyptic Movie Club selection is about just that. In TRUST, Tom Winter remains unsure about the aliens whilst everyone else seems intent on welcoming them with open arms. In TAKE SHELTER, Curtis (played by the excellent Michael Shannon), is convinced the world’s about to end. The bottom line is simple and stark: he’s either right or he’s insane. 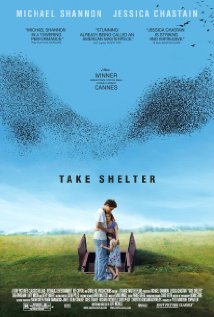 Curtis is an ordinary man who works hard for the family he dotes over. He has a wife and a very young, profoundly deaf daughter, and he’s a well-respected member of the tight-knit local community. But he also has a problem. He is experiencing apocalyptic visions of increasing severity with increasing regularity. As the visions continue, he begins to question his sanity. And as he struggles to maintain his grip on reality – building a shelter, stocking up on food etc. – his behaviour becomes an increasing concern to all those around him. ivermectin bolus 100 mg

I thoroughly enjoyed TAKE SHELTER. It’s a very well made and acted film (particular kudos to writer/director Jeff Nicholls), and key to its success is the fact that no one – Curtis, the people who love him, the audience watching – knows if he’s right or wrong until the last scene. ivermectin in dogs manufacturer Special effects are used sparingly and to good effect, and the central uncertainty gives the film a sense of real unease which grows by the minute. Put yourself in his shoes… you love your family more than anything else in the world and you’d do absolutely anything to protect them. If you thought there was even the slightest chance that Armageddon was looming on the horizon, could you just sit back and do nothing? ivermectin overdose treatment

Here’s the trailer. Grab a copy of the film and find out for yourself if Curtis is right or if he’s got it very, very wrong.