I’ve long tried to understand my fascination with the end of the world. One reason is undoubtedly down to my habit of ‘people watching’ (which isn’t as voyeuristic as it sounds!). Putting characters in extreme situations – and you can’t get more extreme than the end of everything – is a wonderful way of stripping away all pretence and social niceties to expose the black and white reality of what we need to do to survive. When someone’s faced with a yes or no, sink or swim, fight or flight decision in order to stay alive, their behaviour is likely to be a lot more honest and direct than if they’re concerned about what the neighbours are thinking.

Another aspect of Armageddon which intrigues me is its perpetual closeness. I’m guessing that everything probably went okay for you yesterday and so far today, but what about tomorrow? I’m conscious that I sound like a miserable pessimist here and I apologise because I’m not, but the fact remains: anything could happen in the next five minutes. That’s a frightening prospect in itself, but it’s made even more terrifying when you consider how complex and fragile an ecosystem we all inhabit. At any moment something which is completely out of our control might trigger a chain reaction which could drastically alter our individual lives and the lives of those around us. It’s sobering stuff if you think about it (which I do… far too often and in far too much detail!).

Today’s recommendation for my Post-Apocalyptic movie club is a BBC faux-documentary from 2003 which demonstrates just that: The Day Britain Stopped. 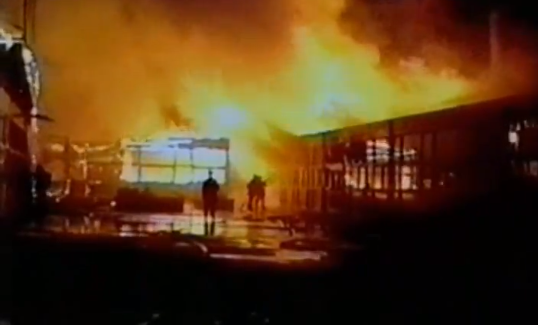 I don’t know how I missed this when it was originally broadcast – the film had enough of an impact to warrant being discussed on Newsnight and other equally highbrow BBC current affairs programmes. But the title appeared on my radar several times in quick succession recently: whilst I was researching my next novel (17 DAYS – I’ll tell you more about it soon) and also because a big-budget remake has been announced, to be helmed by Sir Ridley Scott.

I’ll not pretend to know enough about the political and/or infrastructure developments (if there’ve actually been any) made in the UK since the film was shown, instead I just want to briefly talk about it as an (almost) post-apocalyptic movie.

The film is a fictional documentary set in 2005, which looks back at the events and repercussions of 19th December 2003 when a series of incidents resulted in the UK’s transport system becoming almost completely gridlocked. In response to a serious train accident, industrial relations between the government and the rail workers union have become strained, and a day of industrial action is planned for the week before Christmas – an already busy time for the UK’s road system. The strike goes ahead, increasing the number of people on the roads. A series of initially unconnected incidents result in first the M25 (the orbital motorway which surrounds London), then the rest of the country’s road network grinding to a halt. Millions of people are left stranded in their cars in sub-zero temperatures overnight. There are fatalities and civil disobedience as people’s fear and frustration mounts. But that’s not the worst of it… the implications of the congestion are far reaching and, before long, pressure is mounting at Heathrow and other UK airports with planes unable to take off and others stacked up to land. Mistakes are made and flawed procedures are followed, resulting in an air traffic controller making a call which directs two jets onto a collision course over central London.

The Day Britain Stopped is told from the viewpoint of a number of different key players in the imagined crisis: a government minister, a senior police officer, the disgraced air traffic controller, relatives of the deceased, various ‘talking head’ experts etc. On the whole the performances are very good, and the inclusion of specially shot news footage from various immediately recognisable British media outlets makes the film feel surprisingly plausible and genuine. Sparingly used special effects are combined with stock footage to great effect. Only on occasion does the ‘found-footage’ vibe spoil the atmosphere (for example, the kid filming his family’s drive to Heathrow from the back of the car  – why?)

Overall I was very impressed by this film. The crisis it portrays is ultimately limited in scale and after one hellish day and night, the situation is recovered.  As I said at the beginning of this post, I’m fascinated by our perpetual closeness to the end of everything. The Day Britain Stopped shows just how close we might actually be, and there’s not a zombie, pandemic, rogue asteroid, alien invasion or anything else in sight. Just us. Messing it up on our own.

If you’ve got a spare hour and a half, it’s well worth a look.