Virus aka Fukkatsu no hi aka Day of Resurrection 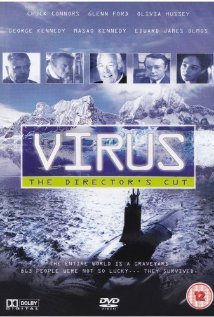 It’s a long weekend here – an extended holiday which the country probably can’t afford, in honour of something many people seem to be quite indifferent about. I thought now would be a good opportunity to recommend another film for my Post-Apocalyptic Movie Club.

Steven Soderburgh’s CONTAGION was released last year, and I was hopeful we’d finally see a decent big-budget pandemic movie. Though it was critically well received, I didn’t like the film at all. To my mind it was as unsatisfying as 1995’s OUTBREAK, but this time with Gwyneth Paltrow as the Aids Monkey (with thanks for that quote to whoever designed the ‘honest’ Contagion movie poster I’ve used here). 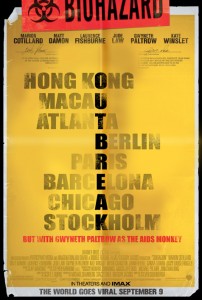 My problem, I think, is that I don’t like any disaster/pandemic movie with a well known cast, and Contagion had a stack of them. If I’m watching a film about the end of civilization, then the end of civilization is what I want to see. I want unknowns and people who look like you and me, not a host of overpaid, airbrushed celebrities. Witness (only if you absolutely have to) 2007’s I am Legend with Will Smith to show how even the most beautiful of post-apocalyptic scenarios can be fucked up by such casting decisions.

So my recommended movie today is definitely not Contagion. Instead, it’s a little-known Japanese-American film: VIRUS (Fukkatsu no hi). It does have a number of well known faces in it, but it was made in 1980, when the term ‘celebrity’ didn’t seem to have quite the same connotations it does today. It’s a crazy film, and here’s a trailer. Click the link below to learn more.

The plot of VIRUS (also known as Day of Resurrection) seems to vary depending on which cut you watch. The film was envisioned as an epic and was notable at the time for being the most expensive Japanese movie ever made. The two and a half hour version I watched is the version I’ll talk about here. You can see it for yourself: it’s available to download at the Internet Archive.

It’s February 1982, and a deadly virus called MM88 has been accidentally created by an American scientist. A sample of the virus has been stolen and as the result of an attack by East German guards on American secret agents, the virus is released and a pandemic sweeps the world.

People die in their millions. Believing that the chaos of the infection will allow the Soviets to attack North America, as he waits to die in the Oval Office, the president is persuaded to activate the Automated Reaction System (ARS) which will automatically launch a nuclear strike on the Soviet Union should any such attack aimed towards the US be detected. The Soviets also prime their own version of the ARS.

Fast forward seven months or so, and the entire population of the planet is dead, save for just under 900 people based in Antarctica, spared because the virus only becomes active in conditions warmer than -10 degrees Celsius. The people there are joined by the crew of HMS Nereid – a British nuclear submarine (captained by, incredibly, Chuck Connors with a bizarre Dick Van Dyke-esque accent). The Federal Council of Antarctica is formed.

Most movies would probably stop there. Not this one.

It is discovered that an impending earthquake will trigger the ARS and cause an arsenal of American nuclear weapons to be launched towards the Soviet Union. This, in turn, will result in the Soviet ARS launching in return. The people of the Antarctic are terrified to learn that because the Soviets believed their research site to be cover for a secret missile base, one of the Soviet missiles will be aimed directly at them! There then follows a hectic dash to the White House to try and deactivate the ARS before it’s triggered.

Do they make it? Not quite. Is a nuclear Armageddon triggered? Oh yes.

I’ve probably told you too much already, so I’ll stop now. Click the link, download the movie, switch off your brains for a couple of hours and enjoy it. I genuinely preferred it to both Outbreak and Contagion. Some of the Tokyo-based scenes of the pandemic are particularly well done and surprisingly gruesome and honest.

Virus is a wild ride. Overly ambitious, bizarre, outrageously far-fetched but a huge amount of fun if you’re a fan of post-apocalyptic movies. It’s a great way to fill a couple of hours if you’re not out flag waving or having a street party this weekend.