A while back I was sent a copy of a new zombie novel to blurb. Nothing unusual about that you might think, but when I looked into the history of the book and its author, I immediately wanted to know more. You see, THE RETURN MAN by V M Zito had very similar beginnings to AUTUMN. 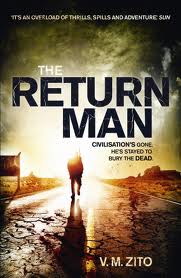 Zito had been dabbling in short fiction writing for some time, but when it came to writing his first novel, he didn’t want to risk shutting himself away in isolation: “I knew I’d go mad in a vacuum of space and time if I locked myself in my office for a year, working on a single project. I was nervous about going so long without a sense of completion, or feedback, or knowing if I was on the right or wrong track. Posting chapters online, one at a time, was a great way around that dilemma; the feedback and support I received from online readers kept me motivated and engaged in the writing process. I think I’ve grown from the experience, and writing a second novel the “traditional way” would be possible for me now – but I’m pretty sure this first one would still be a draft on my desktop if I hadn’t gone online.” Those words certainly rang a few bells with me!

THE RETURN MAN is a novel I thoroughly enjoyed. Here’s the blurb:

“The outbreak tore the USA in two. The east remains a safe haven. The west has become a ravaged wilderness. They call it the Evacuated States. It is here that Henry Marco makes his living. Hired by grieving relatives, he tracks down the dead to deliver peace.

Now Homeland Security wants Marco, for a mission unlike any other. He must return to California, where the apocalypse began. Where a secret is hidden. And where his own tragic past waits to punish him again.

But in the wastelands of America, you never know who – or what – is watching you . . .”

I talked to Zito about the book and his influences. Watch the trailer, then click the link below to read more.

It’s increasingly difficult to find an original zombie story like this. I asked Zito where the inspiration for the book came from. He told me “THE RETURN MAN began with idle daydreaming about the zombie subgenre, all the books and movies I’ve obsessed over since I was a kid. Many of these touch upon the fact that the dead ‘monsters’ were once human. That made me curious. If zombies were human, they’d had families. And what if the families were still alive? Wouldn’t it be horrible, knowing that your dead wife or child was out in the world somewhere as a suffering zombie? From there all the parts of THE RETURN MAN seemed to snap together. The main character would be a professional corpse killer, operating out of love and mercy rather than an ‘extermination squad’ mentality. Dawn of the Dead had long ago hinted that zombies might gravitate to ‘places that were important to them,’ so I decided to explore that further – the idea of using insight into the living person to find their zombie.”

So how did Zito’s online book end up in the hands of Hodder and Stoughton? “A few months after I’d begun posting, I was contacted by the Zombie Times, an e-zine for zombie fans, offering to run a promotional blurb about my website in their next issue. An editor at Hodder & Stoughton happened to be a subscriber; she saw THE RETURN MAN mentioned and checked out the site, which ultimately led to a great opportunity for me. I’m extremely fortunate our paths crossed.”

It’s great to hear stories like Zito’s where a writer’s passion for getting their work directly to potential readers has resulted in such success. And that success isn’t limited to his publishing deals; movie rights in THE RETURN MAN were recently acquired by THE INK FACTORY. It should make a cracking movie.

THE RETURN MAN is available now from Hodder and Stoughton in the UK and Orbit in the US. Highly recommended!