If you’ve spent any time poking around www.lastoftheliving.net, you’ll know that I love to see art that people have produced in response to my work. I was recently honoured to receive the most spectacular piece of Autumn artwork I’ve yet come across. Ladies and gentlemen, allow me to introduce The Swimmer. 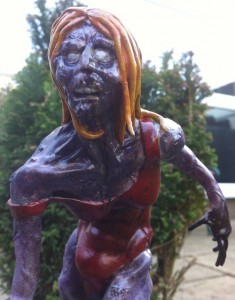 Hopefully you’ll remember this particular character from AUTUMN: DISINTEGRATION. She’s the corpse of a young woman trapped in a swimming pool changing room. The survivors at the Bromwell hotel use her as a kind of barometer to assess the condition of the thousands of corpses outside from a safe distance. You can read a brief introduction to her from the beginning of the book by clicking here.

I’ve talked a lot about the delays which beset the publication of Autumn: Disintegration, and you can remind yourself about that saga here. Back in 2006/7 when the book was first announced, I was speaking regularly by email to Patrick Crilley, a reader based in the US. He told me he sculpted figures for a hobby and offered to sculpt The Swimmer once the book was released. As you know, there followed a delay of several years. I wrote to Patrick last year to tell him the book was finally on the horizon, and he immediately repeated his offer. And here’s The Swimmer in all her glory as a brilliantly realised, 9 inch tall sculpted figure. 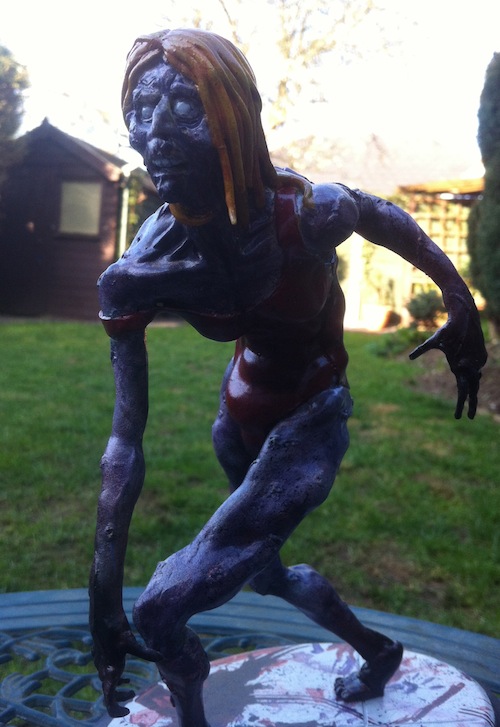 I think you’ll agree, she’s a remarkable looking piece of work. I spoke to Patrick about her creation. Click the link below to read our conversation and to see more pictures and designs.

Raised on Romeroesque zombies (he lists his top three zombie movies as the original Dawn of the Dead, Return of the Living Dead and the Dawn of the Dead remake) Patrick told me he started sculpting about seven years ago. “I have always been a creative individual, and I attended the School of Visual Arts in Manhattan until I started drowning in my student loans. I realized after joining the U.S. military (to pay said loans) that I did not want to rely on my creativity to pay my bills. I have since completed my education and have begun my career in healthcare. I have been very fortunate to continue my artwork on my own terms, picking and choosing projects that interest me rather than how much they pay. Zombies were my first love, so when I started playing with clay it was a very natural thing to start sculpting zombies.” 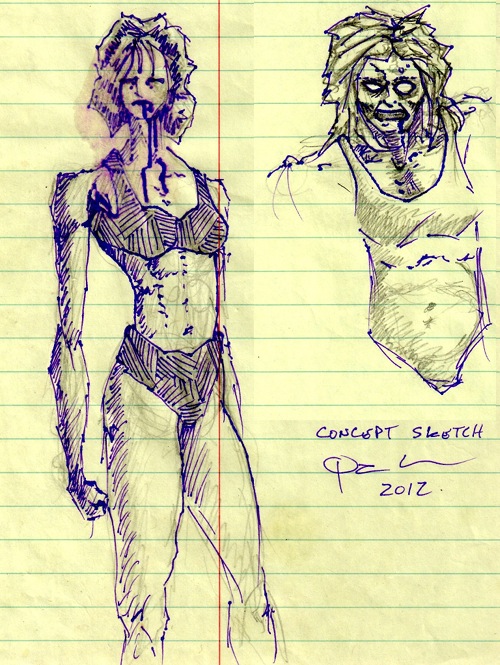 I was interested in the design process. Patrick explained that he began by sketching the figure, and you can see scans of a couple of his original designs here. Once comfortable with the character, he created an armature out of relatively heavy gauge wire, which he then manipulated until he settled on a pose he was happy with. Polymer clay and Apoxie was then used to ‘put the flesh on the bones’. Patrick told me that sculpting The Swimmer took about twenty hours, followed by around five hours of painting. 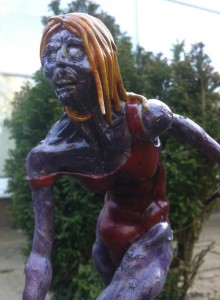 All that effort was definitely worth it, as she now has pride of place in my office. This is going to sound wrong no matter how I say it: I sometimes get lost looking into her vacant eyes and studying her grotesque, once-feminine curves. I guess part of the fascination I have with zombies is how our bodies change so dramatically after death. Decomposition stretches and shrinks us in all the wrong places, and our natural skin tones quickly change and become completely unnatural. In the case of The Swimmer, I love the way Patrick has captured that process… her ragged and stretched swimming costume, her visible vertebrae and bulging gut… She’s morbidly fascinating. My pictures don’t do her justice.

I asked Patrick what influences his work. He told me “Literally everything I see, smell, hear, touch, or taste has some influence on who I am today and who I will be tomorrow. I imagine it’s very much the same for my creativity. Specifically, I enjoy the work of Joel Peter Witkin, Francis Bacon, Clive Barker, Tara Gracey, etc. Music is a big part of my life, and I currently enjoy everything from Aphex twin to The Beatles… the painting of the Swimmer figure was done almost entirely while listening to In Rainbows by Radiohead.”

For me, writing is therapeutic and it allows me to exorcise a lot of demons and release otherwise pent up frustrations. Sculpting gives Patrick a similar release: “I imagine that I would be a very different person if I weren’t allowed to release my creative energy once it has reached a critical mass of sorts.”

Huge and sincere thanks to Patrick for taking the time to produce such a magnificent piece of art, and also for being willing to send it to me – a trip of more than 3,500 miles. Thanks also to him for still talking to me after the five year delay I mentioned at the beginning of this post! If anyone would like to get in touch with Patrick to ask him about his work or sculpting in general, you can email him at biogeist@hotmail.com.

Here’s to The Swimmer, and to many years of her sitting on my desk, inspiring me to write about the living dead!